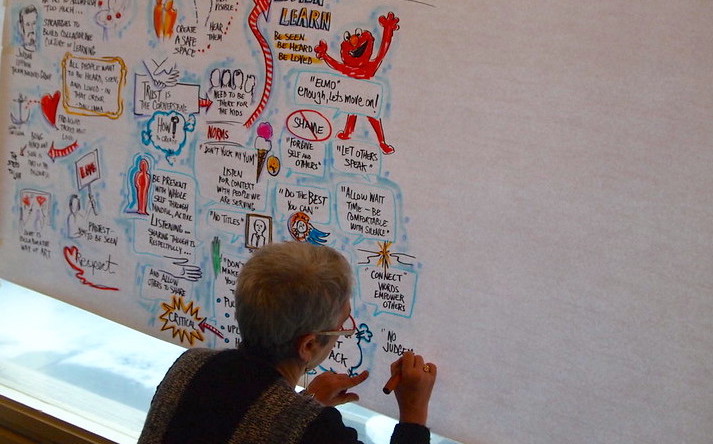 aKin: Erika, great to chat with you today. Let’s kick this right off. Aside from working at aKin, you’re also an adjunct lecturer in human-centred design at New York’s Columbia University, having completed a PhD in participatory design.

As I understand it, human-centred design, also known as universal design or inclusive design, is the collaborative process of designing an environment so that it can be accessed by anyone regardless of age or ability. Is this right?

Erika Whillas: The Center for Universal Design at North Carolina defines it as the design of products and environments, so it goes beyond accessible design for buildings. It's also an experience, not just an object or a place. It's the behind-the-scenes subprocesses that make upfront processes more readily available to anyone.

The idea of the design approach is that you as a designer respect that the people experiencing the problem in the environment ultimately know more about their needs, challenges and problems than you do. The human-centred design approach is basically the idea of speaking to those people as much as you can throughout the design process. It’s a collaborative design process.

It's ultimately cyclical as we constantly evolve ideas; even once something enters the world, the design process doesn't stop. As people use it you ask them for more feedback. How can we make this better? What's wrong with it? Where else would you like to see it? It’s the idea that you bring the user along the journey of design as an ongoing collaborative process. At its core the idea behind human-centred design is that end users know a lot more than you do about their lives.

aKin: At aKin you’re designing AI helpers for the home with a focus on households with people living with a disability. How is human-centred design being applied to your work?

EW: To start with, we wanted to ensure what we're doing is grounded in established best practices, especially when it comes to people living with a disability, so we conducted extensive research of the available literature.

Then, to deepen our understanding of the lived experience, at the start of our design process we conducted around 25 interviews with people living with disability or with primary carers and support workers to explore challenges in daily life.

By speaking to people living with disability and their carers, we sought to understand day to day needs better, but we also wanted to spark our product team’s imagination and together start to think about what a future could look like, where our a•kin AI helped them in their daily lives.

Now we’re at a point where we’re taking our early prototypes back to the people we interviewed and saying, hey, remember all those conversations we had and that AI we were hoping to start?
We started it. What do you reckon? Some say hey, this is great, this is looking good. Others suggest ways we could make this better.

aKin: How do you walk that line between making the AI a universal design but still accessible to a diversity of people with different types of disabilities?

EW: You need to focus on different audiences to identify their specific needs. But you can deliver a solution to those needs that’s universal to everyone. For example, sometimes people living with certain intellectual disabilities don't want to get overwhelmed by interfaces, so we need to keep things simple. We need to keep processes and clicks and all sorts of things to a minimum.

But that's not to say that because that's serving individuals with disabilities it doesn't serve other people. Ensuring that our product is accessible to different groups of users is going to be paramount. But yes, it’s the line we're walking right now to make sure that we're not necessarily completely swayed by one line of audience requests.

I think there's ways to customise interfaces so that the user has control over simple things like font size, the speed of the voice of the AI avatar or colours. In the end we want to empower our users to make their own decisions because we don’t want to dictate to them what we think is best for them. It's a juggling act. We know there are certain needs that need to be met. But we're also very aware of the fact that every individual, regardless if they have a disability or not, has their own individual needs and their own individual preferences.

An example that we often refer to as good human design that’s universally accepted is Uber, an app that sends a car to your doorstep and takes you wherever you want to go. The product wasn’t necessarily designed for people living with disabilities, but it certainly helped that group.

aKin: Where do you see the future of universal design going?

EW: For a long time people designing apps or websites would focus on who they thought were the most tech savvy, most technically aggressive people. But increasingly, we’re realising that there's so many different audiences that want to engage with digital products. We’ve been talking about individuals with disabilities, but there's also increasingly a need to think about older people. Notoriously, digital devices or apps don’t meet their needs.

It’s an exciting opportunity to make your products truly universal by considering the elderly, considering people living with disability, considering people who don't speak your language.  Technology is best when it brings humans together, so if we can invite more people into that digital community through thoughtful and inclusive design then I think we're in for a fun ride in the future.